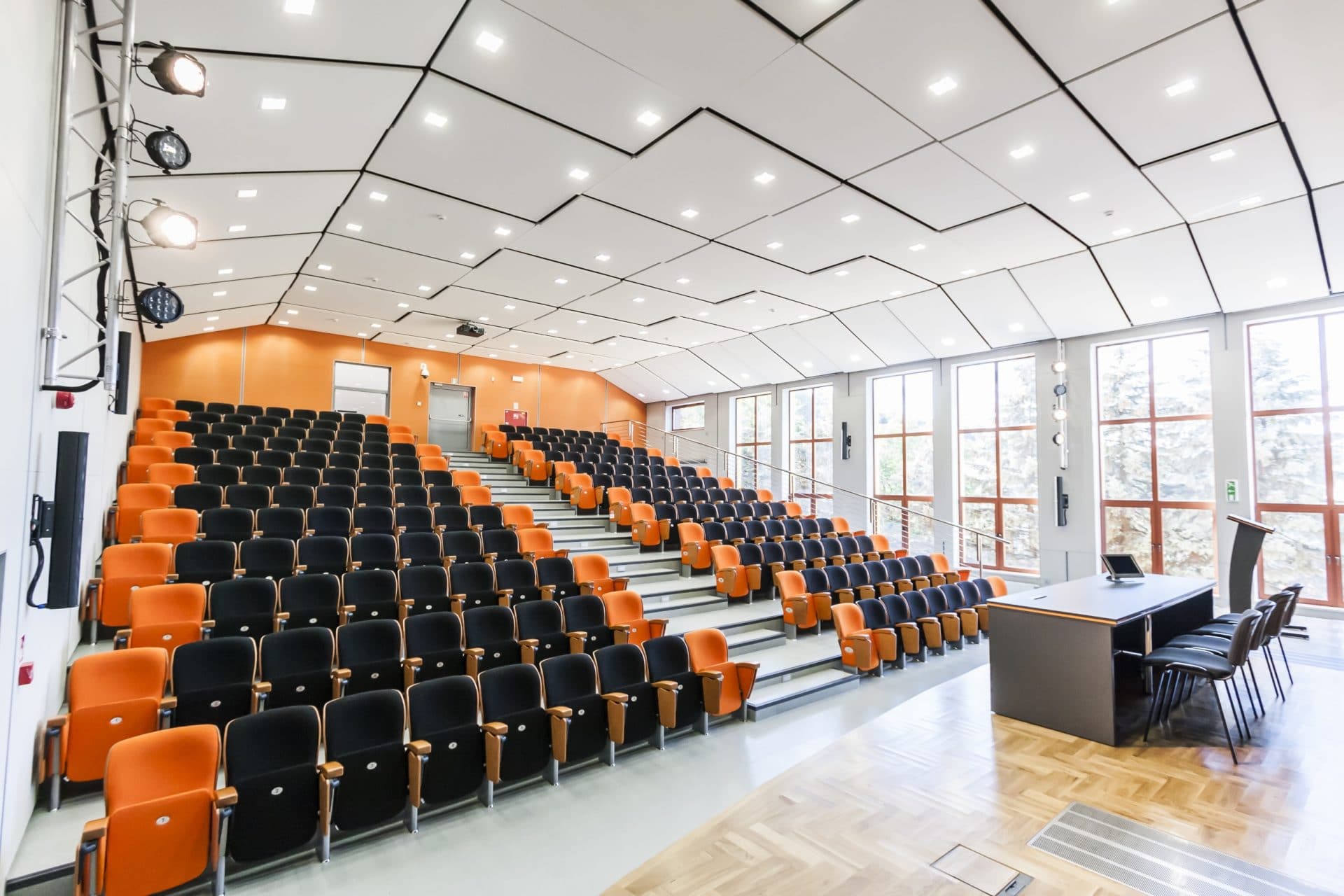 During performance of the installation in the Sport & Didactic Centre of Jan Grodek State University in Sanok, the main assumptions included preparation of an integrated system of control of audio-visual equipment and lighting as well as sound in the assembly hall of the Sport & Didactic Centre during presentation of lectures and a reliable sound system for the hall and for the sport infrastructure used for service of sport events.  The main element of the sound system of the sport hall is Audac R2 mixing matrix, which the individual music sources are connected to. We used there two players: CD/MP3 AMC MP01 and RMP-2760 USB. On the speaker position, there is inter alia Audac PMX 124 mixer and a table microphone, from which signal may be directed to the selected zones of the facility. AMC ceiling loudspeakers were placed in the hall and Bose column loudspeakers were placed in the assembly hall.

The screening system was based on Adeo Alumax screen 5 m wide, unfolded in an electric way. Due to the size of the screen, we used Hitachi CP-WU9410 with brightness 8 500 ANSI lm and contrast min. 2500:1. The presentation source is selected remotely from the level of CUE control system by a multi-functional switcher. Two high-quality PTZ cameras were installed in the assembly hall. In the lecture room, basic stage lighting system was installed, including two groups of spotlights, installed in the number of 4 pieces on each of the side walls to a special load-bearing structure. The windows of the room were equipped with the system of electric blackout blinds, moved down automatically from CUE control system for the time of the multimedia presentations.

This website uses cookies to improve your experience while you navigate through the website. Out of these cookies, the cookies that are categorized as necessary are stored on your browser as they are essential for the working of basic functionalities of the website. We also use third-party cookies that help us analyze and understand how you use this website. These cookies will be stored in your browser only with your consent. You also have the option to opt-out of these cookies. But opting out of some of these cookies may have an effect on your browsing experience.
Necessary Always Enabled
Necessary cookies are absolutely essential for the website to function properly. This category only includes cookies that ensures basic functionalities and security features of the website. These cookies do not store any personal information.
Non-necessary
Any cookies that may not be particularly necessary for the website to function and is used specifically to collect user personal data via analytics, ads, other embedded contents are termed as non-necessary cookies. It is mandatory to procure user consent prior to running these cookies on your website.
SAVE & ACCEPT